How is Christmas Celebrated in Japan?

How is Christmas Celebrated in Japan?

As we celebrate Christmas at the end of a long and extremely strange year, you might find yourself wondering whether people in Japan celebrate in the same way that we do, or whether they celebrate at all.

The western celebration of Christmas is rooted in Christian tradition, and although it is now celebrated by people of all faiths, you can see how a non-Christian country wouldn’t have many of the things we think of as quintessentially ‘Christmas’.

I think the one fact about Christmas in Japan that most of us have heard, is that people eat KFC for their Christmas Dinner. Whilst this isn’t true of everyone, it’s estimated that around 3 and a half million families will eat KFC on Christmas Day in Japan.

Japanese people knew that turkey was traditionally eaten in the West and looked for the next best thing. Foreigners living in Japan were also looking for the closest alternative to their traditional Christmas dinner. KFC had arrived in Japan in the 1970s and realised that they could offer their chicken as the perfect solution. In 1974 a marketing campaign with the slogan “Kentucky for Christmas” took off, and now KFC sells up to 10 times more chicken on the 24th December than any other day. 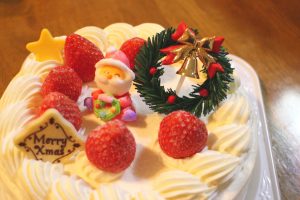 Some families will have a special Christmas cake. This is usually a sponge cake with strawberries and whipped cream – nothing like our Christmas cake laden with dried fruits and brandy!

With Christians making up 1% of Japan’s population, Christmas isn’t actually a national holiday in Japan. Christmas in Japan could be compared to Valentine’s Day in the UK. People are more likely to spend the day with friends or romantic partners than have the big family reunions we are accustomed to here (2020 not included). Despite there being less of an emphasis on Christmas in Japan, there are still great light shows and illuminations, many of them free, that people can enjoy. 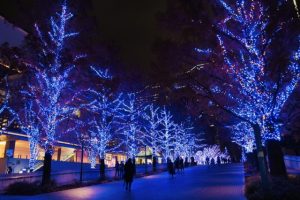 Father Christmas (or Santa Claus) is also present in Japan. Interestingly, as most Japanese homes don’t have chimneys or fireplaces, he is a ghostlike presence who can walk through walls to deliver presents!

Whilst Christmas isn’t a major holiday in Japan, it is still celebrated in its own, uniquely Japanese way.

So, from everyone here at Nishura East, メリークリスマス! Merry Christmas!