In the North West of Kyoto stands a gold temple. Originally a villa for the Saionji Family, the site was bought by the shogun Ashikaga Yoshimitsu in 1397. After his death, his son converted the villa into a Zen temple, the kinkaku-ji we see today. Although that’s not quite true. Having survived a fire in the 15th century which destroyed all the other buildings in the complex, in 1950 a novice monk burned down the pavilion. In 1955 the temple was rebuilt, almost completely matching the original – although whether the temple was originally as gold as the current one is still debated. 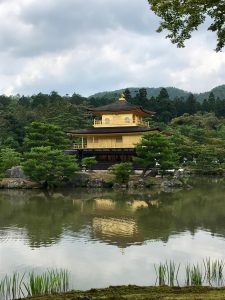 Rebuilding the temple to the original specifications wasn’t too difficult, as Ashikaga Yoshimasa (the aforementioned Yoshimitsu’s grandson) commissioned a second temple, Ginkaku-ji (the silver pavilion) to be built as his retirement villa. The silver pavilion was built to resemble the golden pavilion as closely as possible and was originally supposed to covered in silver leaf. They never actually got round to it and so the pavilion stands ‘unfinished’, which many consider to embody the aspects of wabi-sabi.

What’s great about visiting Kinkaku-ji is that a lot of visitors choose to wear kimono when they visit. It’s wonderful to see so many people dressed so elegantly, in bright colours and patterns. Entry to the site costs 400 yen (less than £3) and takes you on a path that lets you view the temple from all angles. It really is impossible to take a bad photo. There is a rest area towards the end of the path, with souvenirs available and a Teahouse. It’s easy to spend an hour wandering the garden and admiring the temple. It does get very busy though, so be prepared for crowds, or visit when it opens. Whilst I visited in the summer, kinkaku-ji – as with most place in Japan – looks incredible during all the seasons.

Kinkaku-ji is one of the most popular sites in Kyoto for good reason. Be sure to see it for yourself when you’re next in Japan. 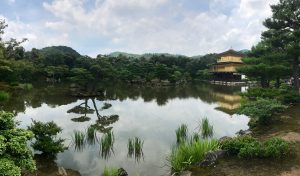