Hidden in Kyoto is the last silk marbling workshop. Nose Moriyoshi is the only person in the world who knows and uses this technique, to create incredibly patterned sheets of silk. So incredible are they in fact, that the French fashion house Hermès – famous for their silk scarves – employed the artisan to make a collection for them using this technique.

Moriyoshi-san’s father-in-law went to Germany in 1963 and learned this technique, bringing it back to Japan and was soon running a thriving business. Sadly, the company collapsed, and all the employees left. Only Moriyoshi-san and his wife and sister-in-law were left. They continued to produced marbles silk scarves from their small workshop in Kyoto for decades, just the three of them.

A sample book, with swatches of the marbled silk made its way into the hands of Hermès. From there they managed to find the Nose family and used the silk marbling technique to create some beautiful scarves.

With the bright colours and crisp lines of the patterns, you would be forgiven for thinking that the patterns were designed on a computer and printed electronically. The actual process is absolutely fascinating. 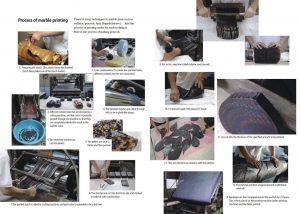 An explanation of the silk marbling process from http://www.kyotomarble.com/kyotomarbleEN/

How is it created?

Pigment is mixed into a starch – like coloured clay. To create different colours, starches are mixed together in exact quantities. The starch is then passed through a set of rollers to form sheets, which are then cut into pellets. Pellets of different colours are packed into a frame to forma a block, which is then passed through the rollers. At this stage you can begin to see the marble design taking shape. The starch is then cut into smaller squares, which are stacked and pressed. Depending on the pattern the starch may be pressed into different shapes. In order to print the silk, the starch is cut into the desired shapes and wrapped around a cylindrical steel roller. This is wrapped in cloth and left to set for around 24 hours. The roll with the coloured starch can now be rolled across white silk to create the marbled silk.

It’s almost mesmerising to see the colourful patterns transfer onto the crisp, white silk. Hopefully with the attention brought to the technique by Hermès, Moriyoshi-san will be able to pass this technique on to more young artisans in Japan. For now, he has his son to keep this art alive.

You can watch this video that Hermès made about the Nose family and their silk marbling technique.