Naoshima – the Island of Art

When my Sister suggested we visit Naoshima Island during a trip to Japan, I admit that I had absolutely no idea where it was, or why it was worth visiting. Having been there, I can now say that it is absolutely worth visiting, and I am so glad we did!

Naoshima is an island in the Inland Sea of Japan. It was originally a fishing village, until a Japanese businessman decided to turn it into an art island. Naoshima is now home to five art museums as well as numerous other galleries and art installations. Tadao Ando, the award-winning architect, has designed multiple buildings on Naoshima.

We booked a yurt on the beach to spend the two nights we were there. It was certainly an interesting place to stay, although what really made it stand out was the proximity to both the water and my favourite sculpture on the entire island.

On the end of a concrete pier jutting out into the sea, stands a bright yellow, polka dot covered pumpkin. It’s one of Yayoi Kusama’s most iconic art pieces, and in my opinion one of the highlights of the island. The pumpkin was never busy, but we were lucky to be able to walk over whenever we felt like it (and take as many photos as we liked without feeling rushed).

We had a fair amount of rain during our visit (one of the downsides of visiting Japan in the height of summer) but the stormy sky certainly added to the slightly absurd nature of the pumpkin. 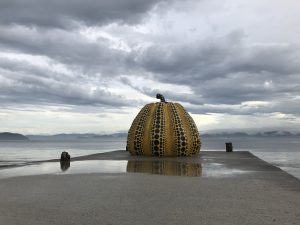 Another place to visit in Naoshima is Tadao Ando’s Chichu Art Museum. The museum is partially submerged, and houses works by Monet as well as Walter De Maria and James Turrell. One of Turrell’s works is a blue room that, when you step into it, seems to go on forever. It was what I imagine stepping into a television would be like! There are plenty of other art houses on Naoshima, and it’s great fun to just wander around the town and see what you come across.

There are plenty of good restaurants on the island, as well a 7-eleven near the port, so you’re never too far from a bite to eat. Also near the port is another of Kusama’s pumpkins, this time a red one that you can step inside. There are so many other amazing art pieces and exhibits that I haven’t even touched upon, including ‘I♥湯’ – a bathhouse filled with art that you can enjoy whilst soaking in the hot water.

Naoshima can’t really be described adequately, you’ll just have to visit for yourself!