I don’t know what I was expecting when I visited Osaka Castle, but it wasn’t what I got. When I think of visiting a castle, I think of rooms preserved and staged as if it was still their heyday, like Hampton Court Palace or Windsor Castle. That wasn’t the case at all.

It might have been my fault for not looking at the history of Osaka Castle at all before visiting. It is in fact a very interesting history – originally built in 1597 it was the site of the siege of Osaka, withstanding the assault of a 200,000-man army. The castle was semi-burnt down in 1660 when lightning struck the gunpowder warehouse, and further burnt down (by another lightning strike!) in 1665. The castle was then repaired in 1843 before being, you guessed it, burnt down in 1868. During World War II the castle was one of Japan’s largest military armouries, before being targeted and destroyed by US bombing raids. Finally, in 1995 the government of Osaka set about restoring the castle to its Edo period grandeur. The castle you can see now was completed in 1997 and is built from concrete. 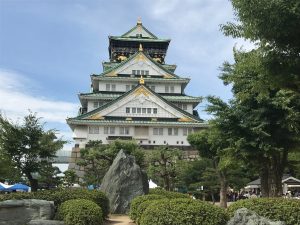 The castle itself is spectacular with its pristine white walls and green roof. The interior of the castle is completely modern and operates as a museum. The museum details the history of the castle and city of Osaka. There are some interesting displays including a replica of the Golden Tea Room – a tea room that Lord Toyotomi Hideyoshi had constructed in the 16th century that was entirely gilded in gold-leaf. There are also great views over the city from the top of the castle.

Osaka castle is set within a park with some nice gardens and food stalls – from which I got a much-needed kakigori (shaved ice) to help me withstand the July heat. Apparently, there is also a time capsule that was buried in the park in 1970 and isn’t to be opened until 6970. Yes, that’s right, 5000 years later. There is also a moat, which I’m pretty sure you can take boat rides on.

All in all, Osaka castle is well worth visiting, but be aware that it’s a modern museum inside not a historical monument. If you don’t want to visit the museum then go to the castle park and admire the castle whilst enjoying the gardens.