What I ate in Japan

What I ate in Japan

There’s no doubt that Japan has some of the best food available, and the rise of sushi in the west only goes to prove it.

Writing my last blog post about food had me looking through all my photos (and salivating), so here are a few of the best things I ate in Japan.

I had this at one of the many restaurants in the outer market of Tsukiji Fish Market. Despite the wholesale fish market moving to Toyosu, the outer market remains. I enjoyed this donburi so much that I had the exact same meal a week later (albeit from a different restaurant, as I found the market pretty difficult to navigate). Consisting of lightly marinated slices of fresh lean tuna, over a bed of fresh sushi rice, sprinkled with sesame seeds and served with a slice of fresh rolled omelette, this was genuinely one of my favourite meals I had whilst in Japan. In fact I’m salivating as I write this! Pictured here with a negitoro (chopped fatty tuna with green onion) and salmon don, which my sister had (and was also very good!) 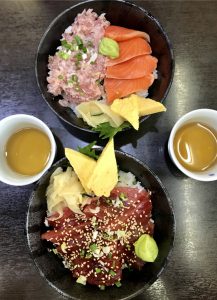 I’m a huge fan of squid and octopus, so jumped at the chance to try all the octopus dishes whilst I was in Osaka. I will admit to not being hugely keen on Takoyaki – it could well be that they were so incredibly hot when I tried to eat them that I was blowing out steam, or probably more likely that I don’t like mayonnaise (which they were generously drizzled with). Whilst walking around Kuromon market some octopus skewers caught my attention. I bought one, which was then cooked in front of me. Not only was it delicious, but the atmosphere of sitting in the market eating freshly cooked fish, whilst surrounded by so much food and bustle was really special. 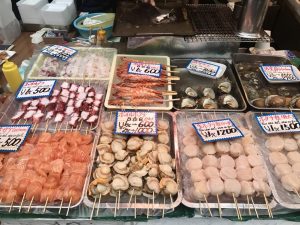 Maybe not the first food you think of when Japan is mentioned, but one of the upsides of visiting Japan in the sweltering month of July is the surplus of ice cream you can eat without feeling guilty. And it has to be said that Japan has an incredible selection of ice cream on offer. From soft serve parlours boasting Hokkaido milk ice cream to konbinis with Choco Monaka Jumbo wafer bars, you can find ice cream to suit every palate. I have to mention the Sakura/bamboo soft serve I had whilst visiting Arashiyama in Kyoto. Whilst not noticeably bamboo or cherry blossom flavoured, it certainly looked the part, and was very refreshing! 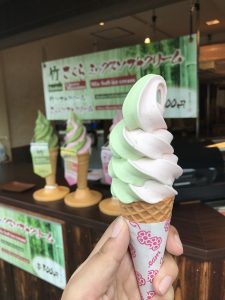 I have a real sweet tooth, so I was thrilled by the selection of sweets and desserts that Japan has to offer. Taiyaki are a particular favourite, fish shaped pancakes filled with sweet red bean paste, or custard. You can even get taiyaki ice cream. I also have to talk about mochi. I think my only experience with mochi before I went to Japan was the mochi ice cream you can get at Waitrose. Whilst they’re nice, they aren’t really comparable to proper mochi. Squishy, chewy, pillowy rice cake filled with red bean paste, strawberries, chocolate or (my favourite) custard. If you’re going to eat mochi be prepared for a workout for your jaw! All the chewing is part of the fun though. Another dessert that deserves a mention is the souffle pancake. I don’t think you can say you’ve been on Instagram if you haven’t seen a video of these 2-inch thick, fluffy pancakes. Stacked three high and served with whipped cream and syrup they were incredible indulgent (and meant we didn’t need any dinner that day!). 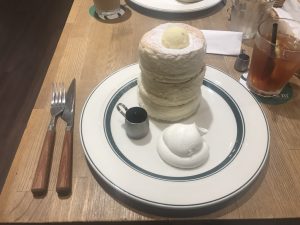 You may have noticed that I’ve omitted some Japanese classics, such as sushi, tempura and yakitori. I had all three, and all three were delicious! I suppose you’ll have to wait for a part two to find out more about them!