A Trip to Rabbit Island

A Trip to Rabbit Island

It was a rainy morning in Kyoto when I set off on one of the most fun day trips I have ever been on. This was during my second visit to Japan, and I was determined to go off the beaten track and explore areas other than Tokyo, Kyoto and Osaka. I set off on the earliest train I could bear. My destination? Rabbit Island!

Rabbit Island, or Ōkunoshima, is a small island in Japan’s Seto Inland Sea that housed a poison gas and chemical weapons factory in the early 20th century. The factory was closed following World War II, and the island was abandoned. No one is entirely sure where the rabbits came from. Some think that the rabbits were originally used as test subjects for the poison gases produced, and that they were released when the factory shut down. With no predators on the island they… bred like rabbits and populated the island. Some people say that a group of school children visited the island and released some rabbits, whilst the most likely (but least imaginative) story is that the rabbits were released when the island was redeveloped, in order to provide a unique attraction. 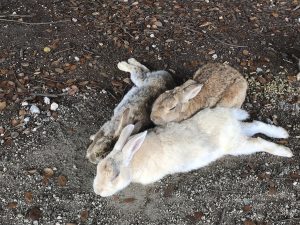 Three trains later and I arrived at the Tadanōmi Ferry Terminal ready to go to the Island. Top tip if you are planning on visiting rabbit island yourself – you can only buy the pellets to feed the rabbits at the ferry terminal before even getting to the island – make sure you stock up, the rabbits are extremely friendly and will swarm you once they realise you have food! If you return the paper bags the pellets came in to the ferry terminal after your visit, they give you a commemorative post card to thank you!

Upon disembarking from the ferry, there really were rabbits roaming around. Most of them were sleeping in little groups, but once they realised people were here that would feed them, they started to gather. I spent a few hours roaming the island and feeding all the rabbits I came across. I visited in late June, and whilst the weather wasn’t ideal – hot and humid with frequent rain showers – there weren’t too many other visitors, which was fantastic. 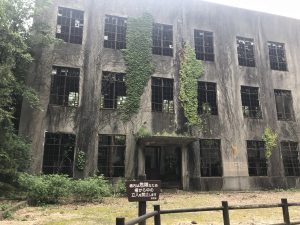 I highly recommend visiting the local museum. It’s well worth the 100 yen entry fee (less than £1) and is a sobering guide to history of the island. The dilapidated ivy-covered factory also stands as a reminder of the island’s past and is one of the first things you see when arriving.

Another tip – there is a restaurant and a café on the island, as well a few vending machines, but otherwise there is nowhere to buy food. I had a very tasty octopus set at the restaurant, but you could also bring a picnic as there are loads of places to sit and enjoy views of the sea (as well as the company of rabbits).

Rabbit Island was definitely one of the most interesting places I visited in Japan, as well as one of my favourite trips that I’ve ever made. You should definitely consider a visit if you are near the Inland sea!

Find out more at http://rabbit-island.info/en/