The Bowing Deer of Nara

The Bowing Deer of Nara

Another day trip I made whilst staying in Kyoto was to Nara. Nara is known for beautiful temples and shrines, delicious food and incredible walking trails. The one thing that Nara is most well-known for though, is deer.

Legend has it that the first four gods of the Kasugataisha Shrine travelled from Ibaraki prefecture to Nara on a white deer. Deer were then considered sacred, and you could be put to death for killing one. Whilst I don’t think the death penalty is still in effect in this case, the deer are protected as Natural Monuments, and still considered holy animals. In Nara Park hundreds of wild deer roam free. 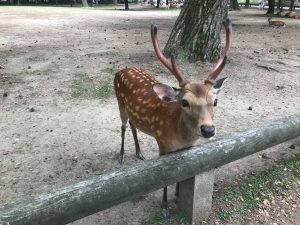 When you arrive, you’ll see some people at the entrances to the park selling crackers. Wonderful you might think, I’m a bit peckish! But wait! These aren’t just any crackers, they’re shika senbei – deer rice crackers. Yes! These crackers are made especially for the deer. And the deer absolutely love them. Once the deer realise you have their favourite senbei they can swarm you and will follow you around until they’ve had their fill or grow bored. In fact, during Japan’s coronavirus lockdown the deer started to venture further out than the park, going to train stations to try and find tourists who would feed them! (Don’t worry though, they eventually realised they’d just have to eat grass like all other deer, and some people say they lost some weight and were healthier for it!)

Be sure to buy some of the shika senbei, a packet of 10 or so is only 150 yen (as far as I remember), and find yourself a deer. More often than not, once you’ve fed one to the deer they’ll bow to say thank you. Whilst it doesn’t happen every time, when it does it is so incredibly charming that you won’t be able to help yourself but to feed the deer some more.

I’m not sure whether this is accurate or not, but I found that the deer with more developed antlers (who I assumed were the older ones) tended to bow more than those with shorter antlers. I like to think that as they get older, they learn that bowing yields them more food.

I spent so long in Nara Park with the deer, that I didn’t manage to visit many shrines before the rain set in. Oh well, that just gives me an excuse to go back!