A (Less than Successful) Trip to see Mount Fuji

A (Less than Successful) Trip to see Mount Fuji

Mount Fuji is arguably one of the most recognisable mountains in the world. The perfectly triangular peak, with a flat summit topped with snow. So many people visit Japan and return with a story seeing Mount Fuji towering above them, in the most picturesque way – this is not that story.

It was a sweltering July morning when I set out from Tokyo to Fujiyoshida. I was on my way to Chureito Pagoda, a pagoda on top of a hill with spectacular views of Mt Fuji. If you’ve seen a guidebook for Japan, chances are the cover was a photo of this pagoda. After one or two hours, and three or four trains I arrived at the Shimoyoshida station. No one else got off the train, which I naively thought was brilliant, as there wouldn’t be too many people at the pagoda. As I approached the entrance to the pagoda there were signs warning of snakes. Ok, slightly worrying but I continued.

The climb to the pagoda was steeper and longer than I thought it would be, but it would all be worth it when I saw Mt Fuji. Finally, I reached the pagoda and the viewpoint. The view was indeed spectacular. Except for the fact that there was no mountainThere were a few other people (and a huge dog) all wanting to see Fuji, but today wasn’t the day.

I stayed on the hill by the pagoda for an hour or so, but the clouds weren’t going anywhere, so reluctantly I made my way back down the hill. Annoyingly one of the trains I needed to get back to Tokyo only ran at odd (and long) intervals, so I had to leave, or risk being stuck at an intermediate station for a while. I’d have loved to walk around the town a bit more, as I’d only really experienced being in larger cities.

Back in Tokyo I was having to pack my bags as I was headed back to the UK the next day. It was a bit disappointing to not have been able to even catch a glimpse of Japan’s most famous Mountain, but if anything good was to come of it, I at least had (yet another) reason to go back.

Here is an artists impression of the view I was expecting: 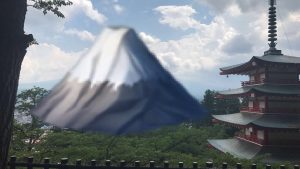