With the Olympics over and the Paralympics finishing this week I think it’s safe to say that the games were a success. Earlier in the year it looked very uncertain whether they would even happen, and they were mired in controversy – from off-key comments made by officials to public protests against the games. But happen they did and a whole new batch of Olympic and Paralympic champions have been crowned.

I have always been a huge fan of the Olympics. I was able to get tickets to some of the events at London 2012 (including watching Tom Daley in the diving!) and tried to watch as much of the coverage from Tokyo as I could. I’ve come away with some new favourite sports – the speed climbing was utterly fascinating to watch and wheelchair rugby aka murder ball (?!) is probably one of the most terrifying sports ever invented.

There’s still time to watch more of the Paralympic games over on channel 4, or head to the Olympic and Paralympic YouTube channels to see the highlights of the games.

There have been some new names added to our Team GB favourites like Sky Brown, the 13 year old skateboard bronze medallist, Charlotte Worthington who won BMX gold with an amazing backflip and the amazing Women’s Artistic Gymnastics team who won the first gymnastics team medal in 93 years for Britain. And of course some well-known names proved why they’re so well-known – names like Tom Daley (Gold and Bronze Medallist), Max Whitlock (Gold Medallist), Adam Peaty (Double Gold Medallist plus a Silver) and so many more.

I’m so glad the games went ahead, and Japan were such wonderful hosts even with all the restrictions in place. Who can forget the man who stood outside the Athlete’s Village with the most encouraging sign. 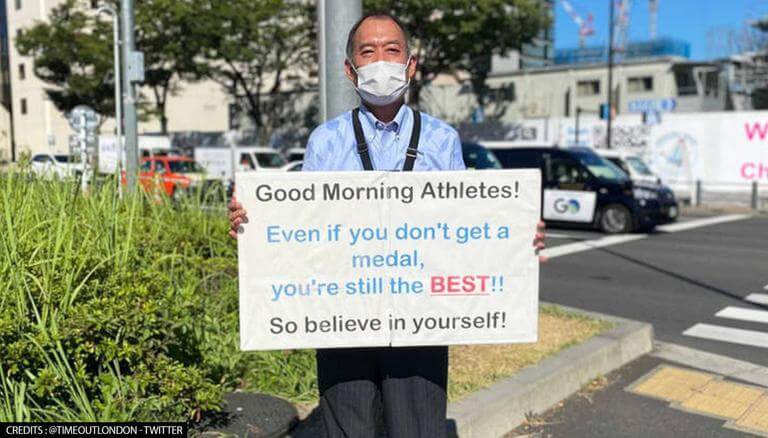 We can look forward to an entirely different games in Paris 2024, but to Tokyo 2020 we all say arigato ありがとう!

Japan in London, Made in Japan, Olympics, Tokyo 2020, Travels in Japan, YouTube