Today (May 5th) marks the end of Golden Week in Japan – a week in which 4 of the 15 Japanese national holidays occur.

On April 29th is Showa Day marking the birthday of Emperor Hirohito, who died in 1989. This is followed by Constitution day on the 3rd May, which marks the anniversary of the induction of the Japanese Constitution in 1947. May 4th is Greenery Day, which celebrates Emperor Hirohito’s love of nature. Finally, May 5th is Children’s Day which celebrates family, and the happiness of children.

Children’s day is most notable by the flying of koinobori, carp shaped windsocks. There are often three koi – a black one to represent the father, a red one for the mother, and a blue one to represent the child. These are a reference to a Chinese legend that a carp that swims upstream and leaps the waterfall of the Yellow River is transformed into a dragon. The koinobori show children that success can be achieved through hard work and perseverance. 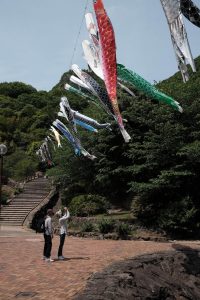 Golden Week is seen as a time to travel, in fact in 2019 35% of the Japanese population travelled at this time. Domestic tourism is a strong industry in Japan, and as a country with such a varied landscape and climate it’s not hard to see why. Japan is even home to the longest continuously running hotel in the world. The Nishiyama Onsen Keiunkan, in Yamanashi Prefecture was founded in 705 AD. That means it has been running for 1316 years – that’s longer than some countries have existed!

2020 and the pandemic that came with it was obviously a change from the previous year’s Golden Week. In Tokyo it was rebranded as ‘Stay Home Week’ with people encouraged not to travel ,and instead to spend time with their families at home.

Not that anyone is really visiting anywhere at the moment but be aware that if you plan to travel to Japan during golden week, prepare for queues, crowds and higher prices than usual. Although if I’m completely honest, I’d be more than happy to put up with all that just for the chance to be back in Japan!