I recently found out that the Tate Modern in London will be exhibiting Yayoi Kusama’s Infinity Rooms from March this year. If you read my previous blog post about Naoshima Art Island, you’ll know I’m a huge fan of her work so this is an exhibition I will definitely be going to.

In 2018 I was able to see THE MOVING MOMENT WHEN I WENT TO THE UNIVERSE, a Kusama exhibition at the Victoria Miro in London. The exhibition had sculptures and paintings, as well as a mirrored infinity room. I luckily managed to snag a ticket just as a few new ones were released, as this exhibition was very popular – and for good reason. I had tried to get a ticket to the Yayoi Kusama Museum in Tokyo both times I was in Japan previously, but never succeeded so was thrilled to see some Kusama in London. 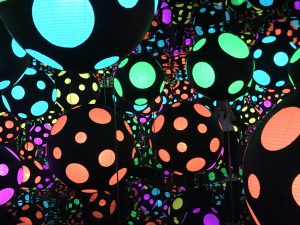 It was quite a rainy day, so the walk to the gallery from the tube station was pretty miserable. The infinity room more than made up for it though. Lined with mirrors and filled with glowing, polka dotted orbs, groups of three or four people wandered through trying to see where the room ended, and mirrors began. Pictures (although incredible) don’t really do the infinity room justice – it really has to be experienced in person. As well as the infinity room there were plenty of other art pieces. In the outside waterside garden, there were giant multi-coloured flowers, with the signature polka dots and the My Eternal Soul series of paintings were also on display. 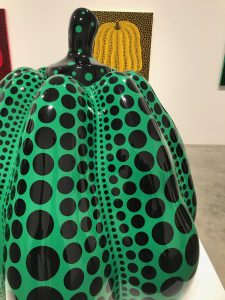 Of course, it wouldn’t be a Yayoi Kusama exhibition without pumpkins. There were three pumpkin sculptures – in red, green and yellow – and canvases filled with pumpkin paintings and polka dots. Although many of the pieces had similar themes (pumpkins and polka dots), each piece still felt distinctive and different to the next. The sheer number of paintings and sculptures was really exciting, especially as the exhibition was free.

If you’re interested in Japanese art, I would definitely recommend trying to go to the upcoming Tate Modern Yayoi Kusama exhibition – it’s on for a year so hopefully COVID restrictions won’t prevent it from going ahead. You can find out more here. 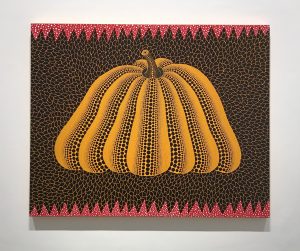